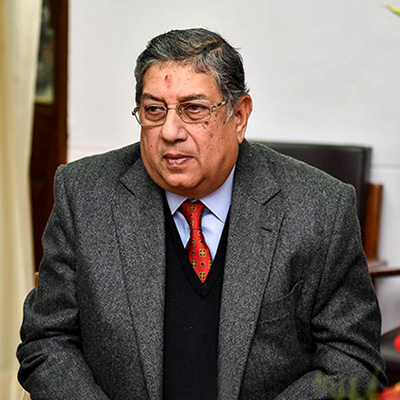 Mr N Srinivasan, Vice Chairman & Managing Director, The India Cements Ltd is a BSc (Tech) from Madras University and Post Graduate in Chemical Engineering from Illinois Institute of Technology, U.S.A. Mr. N.Srinivasan was associated with the Company from 1968 to 1978 and from 1989 till date.

Mr Srinivasan is a special invitee to the General Committee of The Madras Chamber of Commerce and Industry. He is now member of the reconstituted Development Council for Cement Industry. He is presently the president of Tamil Nadu Golf Federation and Tamil Nadu Cricket Association.

He was a Senior Vice President of Federation of Indian Chambers of Commerce and Industry (FICCI). He was President of Madras Chamber of Commerce &Industry (MCCI) for two terms ( 1996-1998) and President of All India Organisation of Employers ( AIOE) during 2000-2001.

Mr Srinivasan was also closely associated with leading sports bodies in the country. He was the President of Board of Control for Cricket in India ( BCCI) and Chairman of International Cricket Council ( ICC). In 2002, he was elected as President of Tamil Nadu Cricket Council (TNCA) and since then he was getting elected consecutively for a number of years.